The Tau Of Espiritu

In the 25 years that have passed since establishing Tau Dance Theater, artistic director Peter Rockford Espiritu has become renowned as much for his masterpiece productions as what is an indisputable talent for fashion. Showcased on stage, you see, not only is a company of dancers breathing life into nuanced choreographies but also costumes and headpieces that continue to wow — all envisioned by Espiritu himself.

Drawing from a well of seemingly endless talents, Espiritu says it encapsulates just how much Tau Dance Theater has to offer. 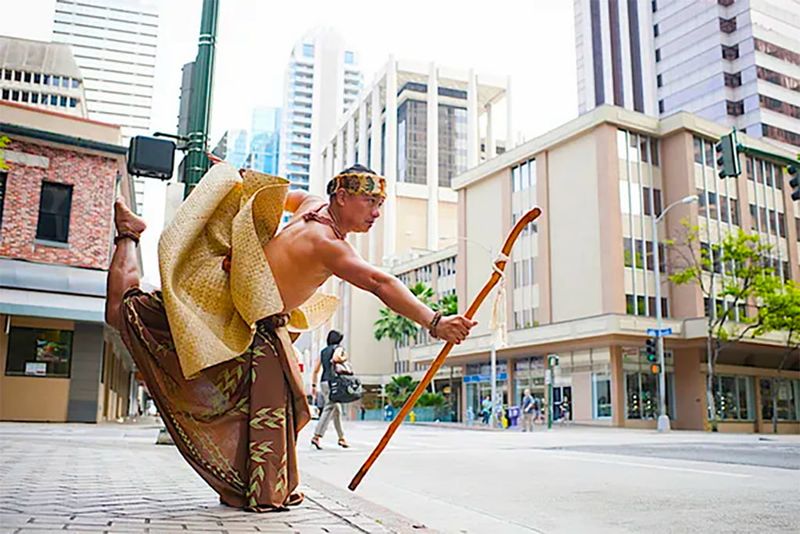 “I really feel like we’re not just about dance,” adds Espiritu, who works hand-in-hand with local designers Manaola Yap and Puamana Crabbe. “We’re about music and fashion. I think those things are very important to me.” It also is a reflection of the journey Espiritu has traveled.

Trained first in hula, he also studied classical ballet at the School of American Ballet in New York City and spent much of the ’80s on the East Coast. There, he found inspiration in the burgeoning urban art scene led by the likes of Andy Warhol and Keith Haring, and, of course, fashion.

“I feel like if you look at the way people dress and how they’ve been influenced, it’s an unspoken language, and I feel like that is translated in the way that I express my- self as an artist,” says Espiritu.

To transition from roots in hula to classical ballet and then some — “I was also a club kid in the ’80s,” Espiritu says with a laugh — has given him quite the repertoire to work with.

“That really influenced me, and it really kind of gave me a very broad spectrum of references for art,” he says. “I think that idea of costume translates still today. … If you look at how I express myself, it’s a natural evolution of culture and the arts in, I like to say Oceania, in the larger spectrum of Polynesia and that whole Pacific Island rim.”

Espiritu also applies that mash-up approach to choreography, combining his expertise in varied dance genres — all of it working in unity.

“[I’m] taking that step as an artist, as a creator, to codify, identify, my own … unique style of movement,” he says. “I think that also translates to the way we dress and the way I want to identify how we look.”

And as Tau Dance Theater continues to celebrate its milestone anniversary, things are as busy as ever, to hear Espiritu tell it.

Despite the challenges of continuing to operate in the midst of the coronavirus pandemic, the nonprofit organization appears to be thriving. Tau Dance Theater recently returned from a touring performance in South Dakota, for example, with invitations to perform in locales such as Scottsdale, Denver and Washington state next year.

GALLERY ON THE GREEN

Each office is owned and operated independently.
Tuesday, May 24, 2022
© Mary Anne Fitch